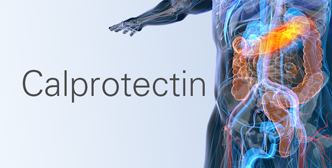 Colonoscopy, which is the gold standard for the assessment of inflammation of the large intestine, requires pretreatment, is invasive, and places a heavy burden on patients with respect to their time and the physical, and financial perspectives, and thus, makes it difficult to perform colonoscopy frequently.1-3)
Therefore, non-invasive and inexpensive biomarkers that can easily assess the inflammatory bowel disease (IBD) activity are required. Therefore, a non-invasive, simple, and relatively inexpensive fecal calprotectin test is used as a diagnostic aid.4) Calprotectin is a highly stable protein that is produced by neutrophils, a type of white blood cell, and reflects the inflammatory state of the intestinal mucosa.5) The results of the fecal calprotectin test show a positive correlation with the results of colonoscopy.1) Thus, the need to take laxatives, which is required for colonoscopy, is eliminated. Patients just need to collect a small amount of stool in a dedicated specimen collection container at home or elsewhere and send it to their physicians or a designated testing institution.

Calprotectin for differential diagnosis of IBD from IBS

Abdominal pain and diarrhea, which are the major symptoms of IBD, can also be seen in irritable bowel syndrome (IBS), which makes it difficult to differentiate between the two diseases in their early stages. Since the treatment for IBD and IBS is different, it is necessary to differentiate between these two diseases. While IBD is associated with inflammation of the intestine, no inflammation is observed in IBS; therefore, IBD and IBS can be differentiated on the basis of the presence of inflammation.6)
The National Institute for Health and Care Excellence (NICE) Diagnostic guidance [DG11] recommends fecal calprotectin test as an aid to differential diagnosis between IBD and IBS.7) Fecal calprotectin test is an effective biomarker for differentiating IBD from IBS,8) and The NICE Clinical guideline [CG61] clearly states that invasive colonoscopy is not necessary for the definitive diagnosis of patients who meet the diagnostic criteria for IBS.9)
Similarly, the European Crohn’s and Colitis Organisation (ECCO) Guideline states that the results of the fecal calprotectin test are in good agreement with those of colonoscopy in terms of assessment of disease activity, and that it is an important test in various clinical settings, including initial diagnosis and monitoring of disease actitivity.10) 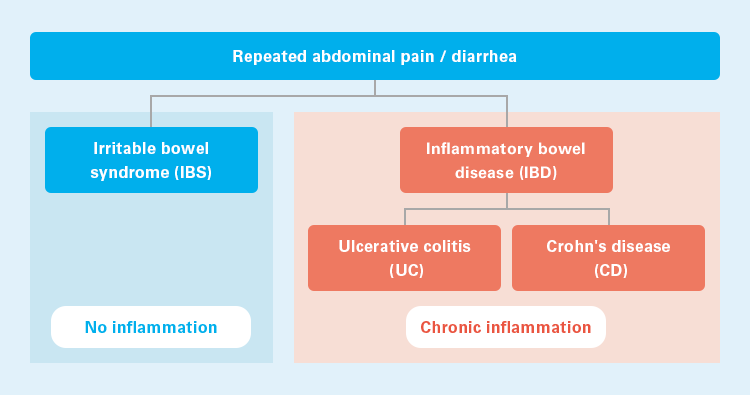 The fecal calprotectin test is not a substitute for colonoscopy, which is a definitive test for IBD, particularly for understanding the disease activity of ulcerative colitis (UC). However, the fecal calprotectin can be performed frequently as it is non-invasive and may predict relapse earlier.13-15) Additionally, it may reduce the number of colonoscopies performed.

Inflammatory bowel disease (IBD) is any disease that causes inflammation in the digestive organs. IBD in a broad sense includes infectious enteritis and drug-induced enteritis. Typically, however, ulcerative colitis (UC) and Crohn's disease (CD) are collectively referred to as IBD.
The number of patients with IBD worldwide continues to increase. The incidence of IBD was estimated to be about 6.8 million patients in 2017, and the prevalence per 100,000 population had also increased from 79.5 patients in 1990 to 84.3 patients in 2017.1) IBD was a commonly observed disease in the United States and Western Europe. However, the number of patients has recently been increasing in Asian countries such as India and Japan,2) and IBD has become one of the most important diseases worldwide. Although it is not a life-threatening disease, appropriate treatment from an early stage is necessary, since it adversely affects the quality of life (QOL)3) and activities such as studying4) and working5); further, IBD has been reported to be associated with colorectal cancer.6)
At present, IBD cannot be completely cured by medication. The goal of treatment is to reduce the disease activity, actively assess the disease activity with colonoscopy, and achieve mucosal healing based on endoscopic remission.7-8)

Annual trends in the number of patients with IBD and prevalence per 100,000 population1) 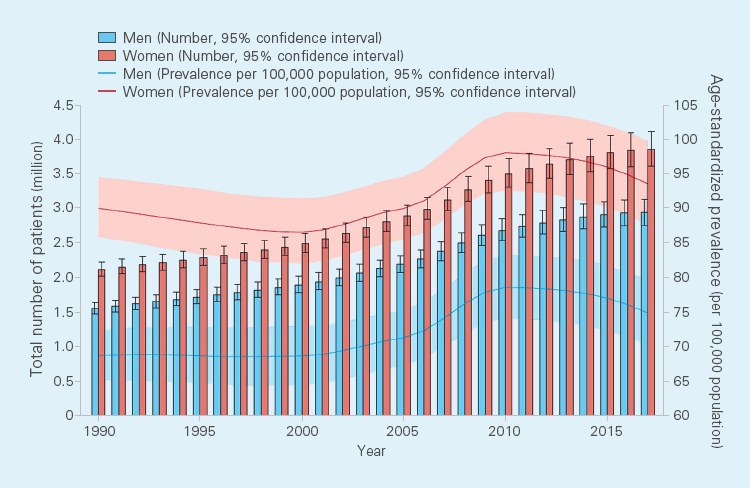